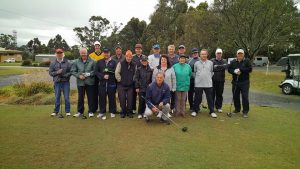 Firstly, what a great event this is proving to be with the excitement of having 19 players teeing off to compete against each other over 18 holes of Golf.

Once again, the weather gods were against us, throwing gale force winds and intermittent rain, but as they say in the classics the show must go on and…that it did.

Upholding tradition (yes, I know it’s only our 2nd time playing this event) the first person eliminated after a chip off was a single figure marker in John Horrocks, our highest point qualifier Duce Dubaich was out on the second hole after a 4-way chip off, last year’s chip off king John Hutchinson who survived 6 chip offs last year was a surprise elimination after being the only one to not score on the 3rd hole. We had 3 ladies qualify for this event, and after looking favourites earlier, over a three hole stretch on 5,6 & 7 they were gone!!!

Players and spectators could feel the tension building over the last ½ dozen holes, President Steve Horter who had made some lucky shots earlier was knocked out on the 12th hole chip off followed by last year’s winner Tom Woodhouse on the 13th.

The events low marker Bill Williams off 1 was out after 3 putting the 14th hole and in the chip off leaving his ball way long, leading to Gerry Ypelaan electing to perform a Reuben and putt up to a foot from the hole and progress to the next hole.

Our last lefty in the final John Engel was out on the 15th opening the way to an exciting last 3 holes, on 16 Greg Cake faced his second unplayable for the day retreating back to the tee to resume play, amazingly Greg was still in contention after Frank Hyett bombed on the hole also, leading to a chip off, after both left their balls some way from the hole, and a close measure Frank was through to the final 3 comprising Frank, Gerry Ypelaan and Aaron Glen.

Gerry was out after Frank holed a pressure putt for a point on 17 leaving the final 2 standing after a great day golfing but enduring shocking weather with the wind and rain conditions. Frank Hyett and “two first names” Aaron Glen playing up 18th hole both with a handicap shot got away well with Aaron hitting two great shots but his ball just ran through the green leaving a difficult downhill chip, unfortunately the ball failed to release enough finishing 4 metres short.

The cagey old timer Frank proceeded to lag his first putt from 6 meters away across the green down to 2 feet and without hesitation knocked in for a bogie 5 nett 4. Aaron left with a similar putt back up hill for a tie and to send it to a chip off, just missing leaving a very happy winner of the Escape Travel Eliminator as Frank Hyett.

Well done to all players who competed and contributed to a great event, along with P.J.Brown and Rod McAlister for refereeing duties and special mention to Frank who promptly donated the prize back so we can run an eliminator over winter. Stay tuned for announcements on dates with the final to be played in sunnier sky’s around Oct/Nov 2018.

A huge thanks to Peter Leighton for his sponsorship – remember Travel Associates (formerly Escape Travel) for all of your travel needs - phone Pete on 51167900.

Yours in Golfing,
Captain Reuben Kincaid

P.S.Yes, it has been mentioned that starting holes aren’t kind to me having been knocked out on the 1st last year and the 10th this year.